What Are TOP 5 Must-See Spots in Frankfurt? 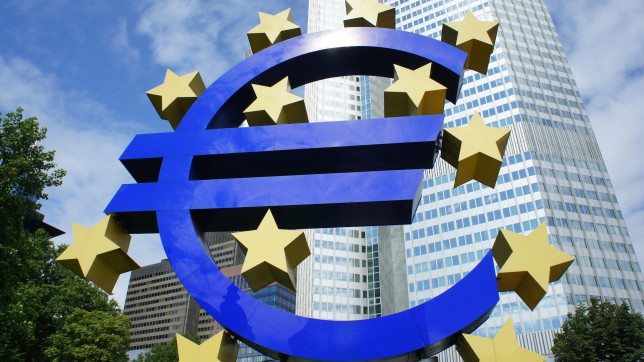 Check out 5 must-see destinations while spending your holidays in Frankfurt!

The German city of Frankfurt am Main is a metropolis with a rich history and a huge number of monuments of modern architecture.

This magnificent city ​​managed to preserve centuries of German history behind the door of modernity! Don’t believe that it’s possible to combine antiquity and modernity in one city? Then it’s high time for you to come and see it yourself! 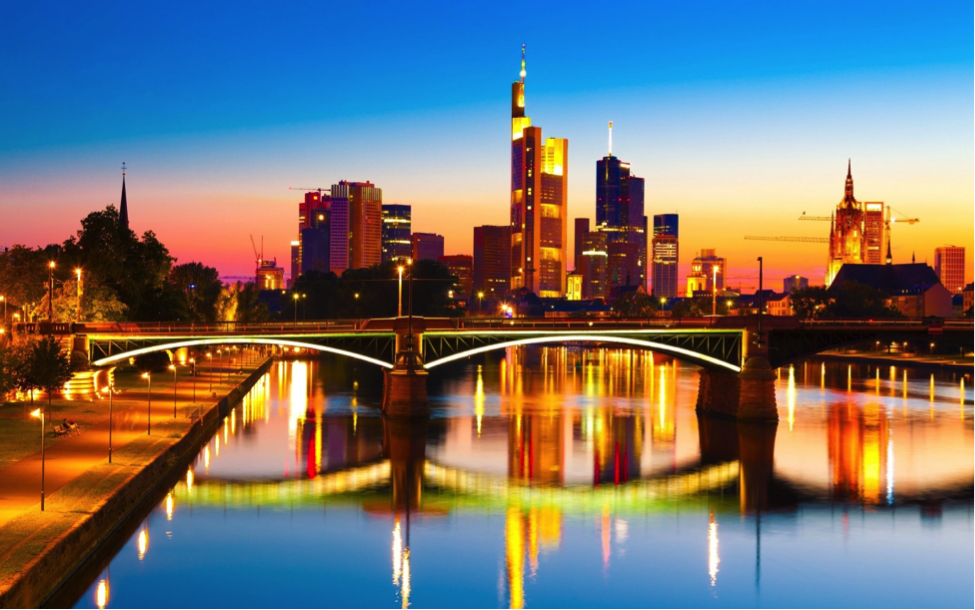 Famous fairs are held here already since the XI century, and since the XIV century they are held each year not only in the autumn, but also in spring.

In the XIV century Frankfurt became the largest trade fair center and in the northern Alps. Indeed, here are a lot of exhibitions – 34 per year, 15 of which are the largest ones in the world. 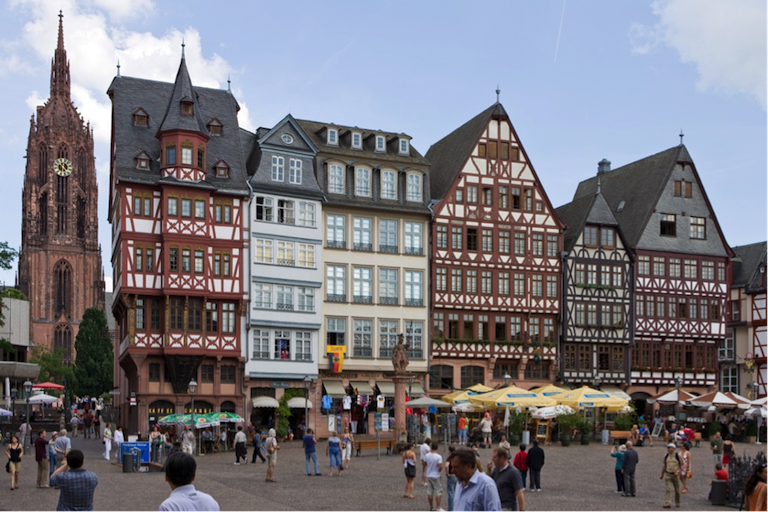 Fairs are held in Frankfurt until now. One of the most famous of them is Frankfurter Buchmesse – the world’s largest book fair. Every October, more than 7,000 exhibitors from hundreds of countries take part in it, and it lasts for five days.

So what are the most interesting and fascinating places of interest in this city?

We would like to draw your attention to the following list of attractions, haven’t visited which you wouldn’t feel the significance of the whole trip.

Alt-Sachsenhausen is the oldest district of the city that so it fully conveys the real atmosphere of Germany.

This is a place where you can wander through marvelous streets with numerous small restaurants to taste the local cuisine, drink beer or eat typically German sausages.

In the Middle Ages, this area was surrounded by watchtowers. 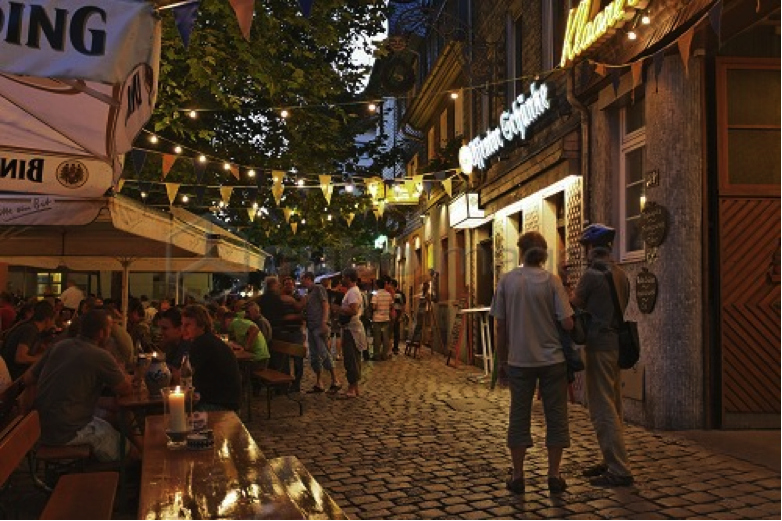 Frankfurt is a city of great artists. Johann Wolfgang von Goethe, a famous cultural figure of the time, was born in Frankfurt am Main, too. His creative work is known and loved throughout the world.

That’s why, one the most significant attractions of Frankfurt is Goethe’s house. Here was born the great poet, he worked here, too. 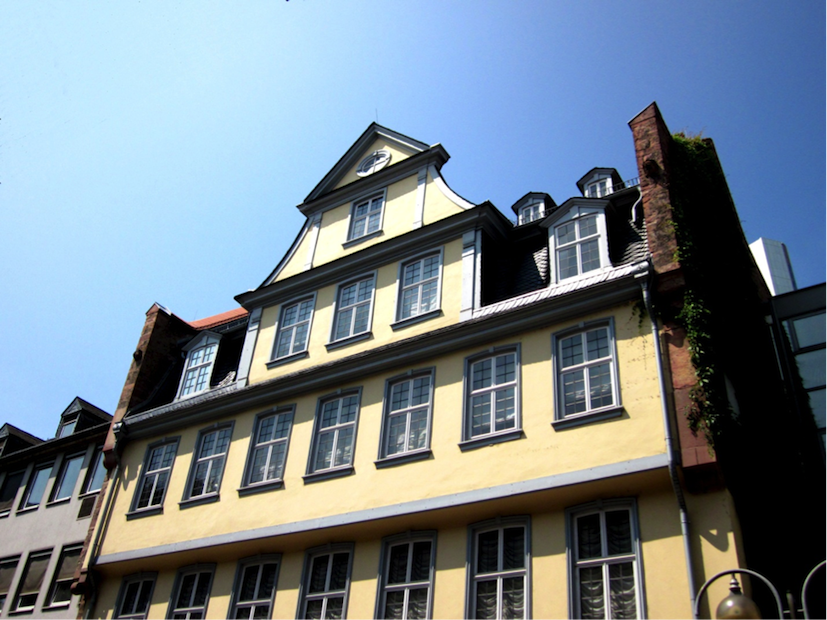 The house was destroyed during the war, but is fully restored to its original form now. The so-called “room of the poet” in the clerical department of the house and puppet theater in the next room are preserved in their original form. 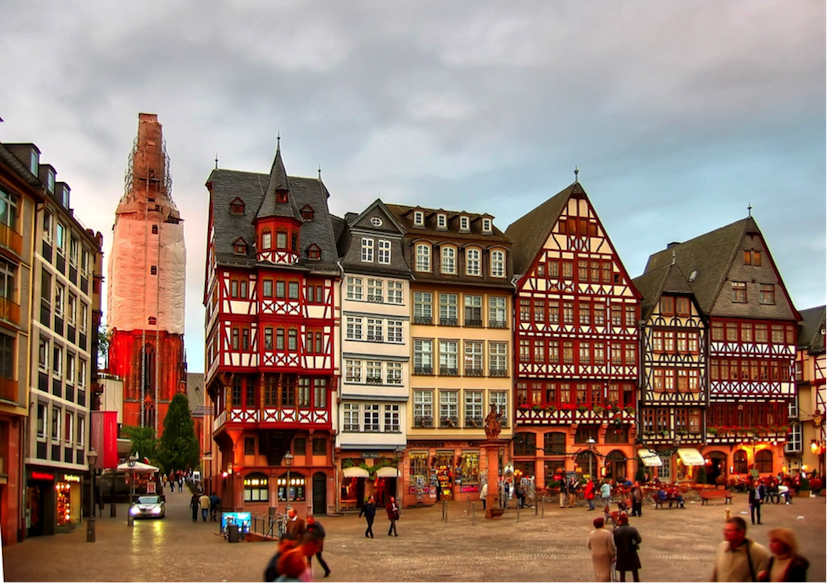 The most visited place in Frankfurt is Römerberg, its downtown.

Here you will see unique half-timbered houses rebuilt after the bombings of World War II.

The only house survived the war is the building on the square, Wertheim house.

All other buildings are the exact copies of those standing here before the war.

If you are a museum lover, you should know that their highest concentration is along the Main River.

Embankment of Main River contains an abundance of museums and galleries in Frankfurt.  Just take a walk and you will definitely find the museum worth your attention. 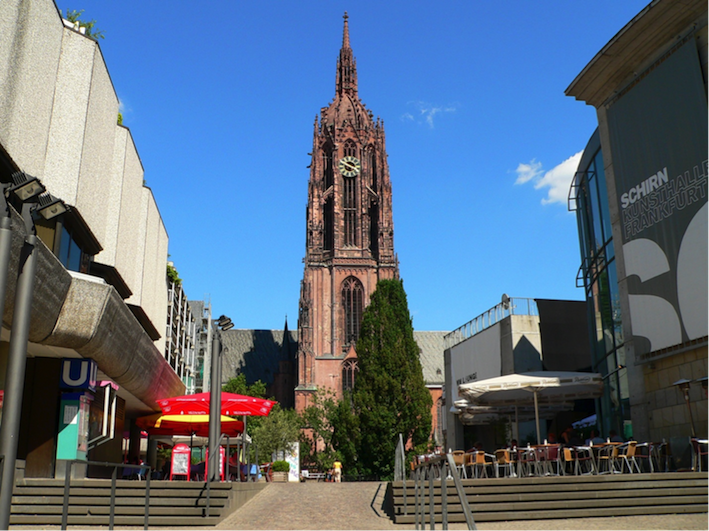 Another significant attraction of Frankfurt is Kaiserdom cathedral, which was built in 1239 and still remains in great condition.

For some period of time the cathedral was a place of coronation of rulers.

The only negative side of public transport in Frankfurt is a quite high the price of 2.6 Euros per trip.

That’s why the best way of moving around Frankfurt is a car. By your own car rental vehicle you will be able to get any point of the city in a wink.

It’s better to book a car in advance to make sure that you get exactly the car you want. A wide selection of cheap cars of all groups you will find here Car rental at Frankfurt – International Airport.